skip to main | skip to sidebar

Joys of crappy cameras and unemployment

So, once again I'm having to tinker with the camera to get it to work. One of these days when I actually am able to spare the cash, I'll have to go find a better one. So the pics I wanted to post are going to have to wait until I get the camera working or find a replacement one.
Posted by Raichek at 4:29 PM 1 comment:

So I finish digging out the envelope, and Robz sent a surprise in the form of a gift certificate. Well, I was really impressed with the ships and despite the slight delay in communication initially, he really came through. I was going to order already but it looks like I'll be doing that sooner than later. He had thrown in two extra Sulaco's, evidently the mold had broke on them. One was the one that the mold tore on. With some patient cleaning, and some green stuff. Looks right as rain now.
All in all, the Sulaco's were excellent models with crisp lines, and fine detail. Though there was some flashing and resin they cleaned up very quickly. They're the perfect scale for cruisers with the Warlock.
I'll get some more pics up once I get them painted.
Posted by Raichek at 10:46 AM 1 comment:

Here's some of the new miniatures I'm working on. Can't tell you just how pleased I am with the castings on these mini's. If you're into starships, I highly recommend Ravenstar's Cold Navy line, (he also makes a mean series of BSG style ships as well) http://ravenstarstudios.blogspot.com/ Chris has been spot on with communication, and though shipping was a little slow for my lack of patience, it was fast enough that I really had no complaints. Here's one of the battleships I received. 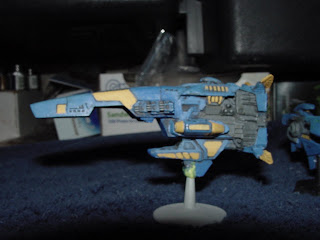 The Gan'Talak battleship. Comes in 5 pieces, basically the main body is all once piece and you have to glue on the tail fins at the back of the ship. I figure they're probably there more for radiators or something similar than simply for aesthetics. The casting was fairly clean on it, with minimal filing and flash. The resin makes for a really light weight ship. There were several small bubbles though ,and one large on down on the lower assembly right in the front. I had to apply some putty and green stuff to fix it up as best as my sculpting skills would allow. This is the second scheme I applied on these ships. The first was Tan and Red, but it didn't seem to turn out on these particular models no matter how hard I tried to make it look right. The blue and yellow just seemed to flow on these models.

The second style of ships I have gotten so far arrived today. These are from Robz over at http://www.hangar18fasa.com/ The ship in the middle is a Babylon 5 Wars EA Warlock Battleship. And yes, those ships are the Sulaco from Aliens. 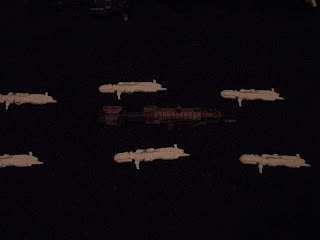 Gah, so need to update this more 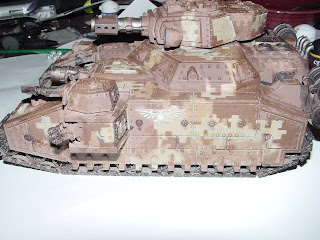 So, it seems like most folks I have trouble keeping up on my blog. Well, here's the beginning of my efforts to correct that problem. So I've made a great deal of progress on my guard. Here's the long awaited pics on my Hellhammer
They're still a little out of date, but all I've done is add some more weathering to the treads with the new powders I've been trying. 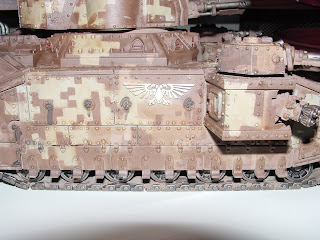 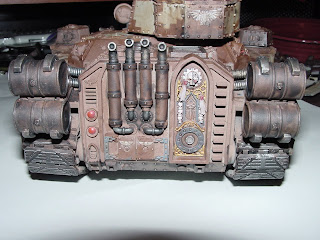 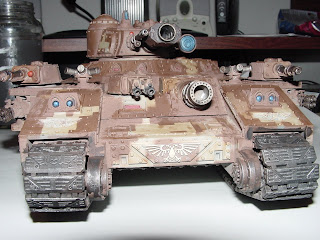 Well, no pics to share tonight as the camera once again has proven to be crap. I can't complain too much, as it was new. Though I'd love to find the actual power cord so I don't have to continue to rely upon the really crappy battery. I'll have to look for it this weekend when I actually have more time to do so. So far the painting is coming along well. I do need to sit down and really start detailing figs, but I've been so caught up with the new pieces from Pig Iron that I haven't even broken out the old figs yet to finish them up. Still I'm actually making progress on the guard. Something I can't say about the marines. The hell hammer is actually starting to look like it's going to be finished this month as well.
All in all it's been a good start and I just need to keep up the momentum.
Posted by Raichek at 8:41 PM No comments: 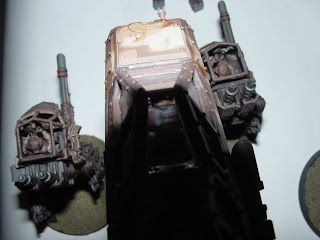 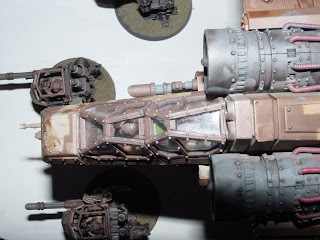 a few detail shots of the cockpit, You can't see much, but there's a hint of the detail.
Posted by Raichek at 9:38 PM No comments: 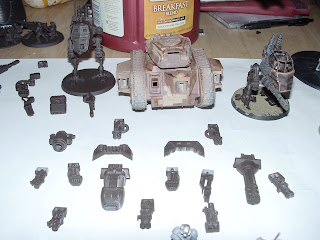 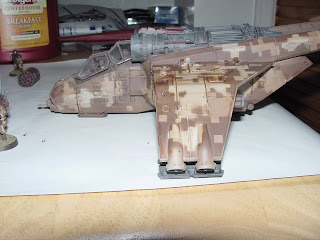 So I got started on the new digital camouflage scheme for my Valkyrie. Other than a few small errors from where the paint didn't fully dry when I put the camo strips on, and a few places where I over-brushed, it's looking pretty good. I definately need to get better lighting for the painting.
So far I've got put together 1 Valkyrie, 3 open topped sentinels, 1 armored sentinel, 1 hell hound, 2 chimera, 1 leman russ demolisher, and 1 leman russ. (Though I'm converting it to a vanquisher model)
The armored sentinel, the demolisher, and the armored sentinel are all magnetized so I can swap out for different weapon load outs. The Valkyrie is also magnetized, but I learned the hard way to double check your polarity on the magnets before finally gluing them in. Luckily it was only the multi laser that I can't use atm, but everything else is golden.
Posted by Raichek at 9:15 PM No comments:

Raichek
Well, what's there to say, I'm a single dad, a salesman, a gamer, a historian, a hopeful novelist. Really just a laid back guy trying to do the best he can to raise a good kid, and make his way through life. Oh Han shot first.